The Great Partridge Race and How We Do Wine! 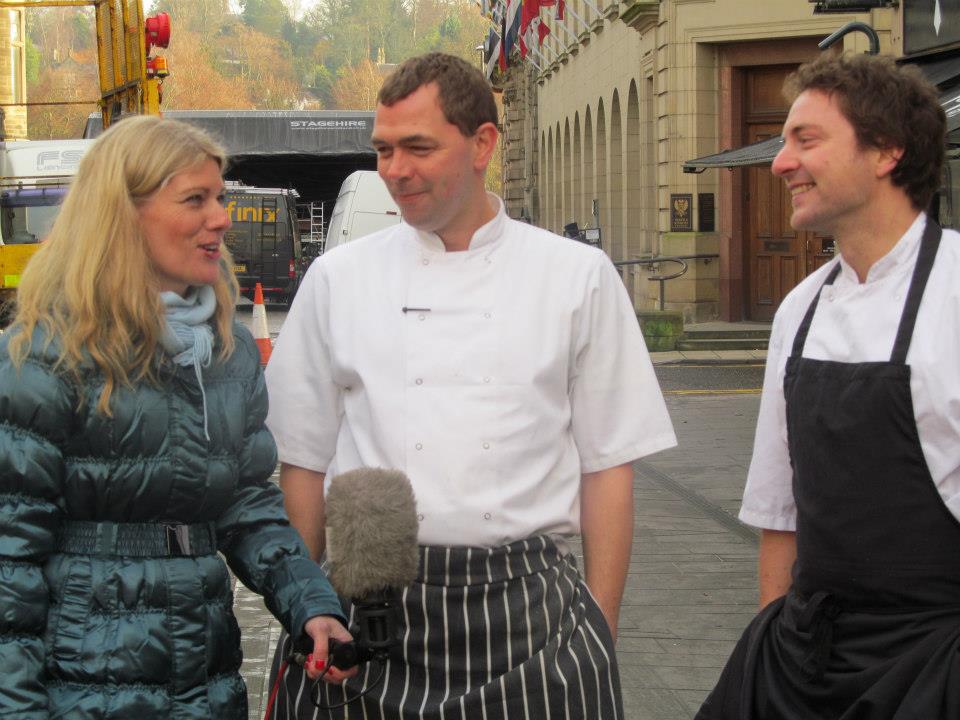 Two Saturday’s ago I’m in the kitchen at 63 tidying up after a busy lunch service, thinking about whether I should squeeze in a run before dinner prep when my phone went. And I was asked one of the most obscure questions I think I may ever have been asked. Did I want to take part in a Partridge Race…. At first I had visions of some underground chefs gambling ring with birds running along spotless steel worktops but no… This was a race to see who could pluck a partridge the quickest and was to be featured in the Slow Food Section of Perth’s Christmas Light Switch On filming to demonstrate an alternative to Turkey for Christmas dinner.  My sparring partner was to be Tim Dover, the call came in from Nicki Martin… Impossible to say no really!

For those of you that don’t know Tim and I are  Perth’s only members of the Slow Food UK Chef Alliance.  The Chef Alliance was set up by Slow Food to encourage and recognise chefs working with local producers, using seasonal ingredients and who get themselves involved in education and spreading the slow food word. It is still relatively new and with Slow Food Perth about to get a big push next year having a chance to promote it on screen was a bit of a coup…. Like I said, hard to say no!
So on a very cold Saturday 24th November I stroll up the High Street with two dead partridges in a black bag to find a table, a TV crew and wee crowd of people to point and laugh at us! Every other bugger was wrapped head to toe in scarfs, coats, hats, gloves and there was Tim and I… Chefs whites and aprons, preparing to shake the feathers off! Quick interview, countdown and we’re off! Nicki gave an interview on slow food while we plucked and giggled like school girls, feathers flying up the High Street (at one point a dead bird’s head flew off). The small crowd became a bigger crowd and the urge to swear increased by the minute.

Who won? Would I be blogging about Tim do you think? It was bloody cold, but great fun and got our message out there for people to think about. If you’d like to find out more about the slow food group in Perth click onto their Facebook page… You’ll also see the highlights from the Race!
We’ve been working with Corney and Barrow, our wine merchants, to create a 5 course tasting menu with wines for some time now I have to say the result is stunning! I’m really pleased with menu that we’re presenting and the mix of Old World and New World wines that Corney and Barrow are tasting for you. You see, one of the great pleasures in working in a kitchen like ours is being able to do just this.  We can recommend wines and offer tastings but an evening like this, where the menu is a perfect marriage to the flavours and subtleties of the wine, this is a real treat to do. Not least because we all had to have several glasses to make sure we’d nailed it just right!  The menu’s here – go have a peek!

If I’m being honest there’s a bit of a control freak in every chef. I do insist that everything pulls together to create an overall experience at 63 and this is one of these nights when I know things couldn’t get any better!  There are still some spaces left – Ralph will hosting with Gordon from C&B – so if you’re looking for a real foodie night out give us a call.  I for one, can’t wait!
Scroll to Top